At the provincial capital, some 80,000 supporters waited and cheered Robredo during the “Quezonduan” grand rally at the open grounds near the city hall .

During the event, supporters raised their glasses to Robredo in the course of the Tagayan, a ritual sealing the “Quezonduan” between the presidential candidate and the people of Quezon. They also gave her several artworks and other tokens. 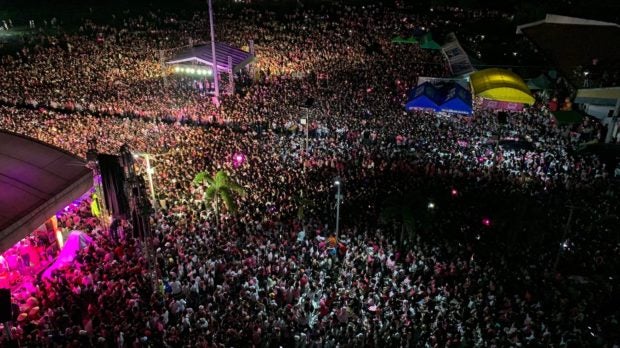 An aerial shot of the Quezonduan grand rally gives a glimpse of some 80,000 attendees who flocked to the Leni-Kiko grand rally in Lucena City. Image from Gabriel Pabico Lalu / INQUIRER.net

Robredo in an earlier ambush interview explained that it is very important to tour Calabarzon and Quezon in particular as aside from being a vote-rich area, it is also a huge province geographically which means that several towns cannot be visited at once.

Before visiting Lucena, Robredo went to Gumaca and Guinayangan, where she also got a strong welcome from people in the area.

This is the second time that Robredo went to Quezon province, after visiting the towns of Real, Infanta, and General Nakar last April 18.

Sins of the father

During her visit to Catanauan town early Thursday, Robredo’s hands were raised by town Mayor Ramon Orfanel, who urged Filipinos to refrain from falling prey to claims that the sins of the father could not be blamed on the son.

According to Orfanel, the sins are forgiven only if the son asks for forgiveness — referring to Robredo’s rival, former Senator Ferdinand “Bongbong” Marcos Jr., whose father and namesake had been blamed for human rights abuses in the country during the martial law era.

Fisherfolk and farmer representatives also raised the hand of Robredo to back her presidential candidacy, while priests from the parish of Gumaca went all the way to Catanauan to express their support of her.

Leni-Kiko supporters in Quezon gear up for campaign