Oh, what could, and probably should, have been.

It was Real Madrid that had been tipped to progress by online bookmakers, but when Timo Werner put the visitors 3-0 up with barely 15 minutes left on the clock, Chelsea must have thought they’d booked their place in the semi-finals of the Champions League.

But it would be Karim Benzema – following his hat trick in the first leg – who would prove to be the hero once again, slamming home a bullet header in extra time for his fourth goal over the two legs, sealing a 5-4 aggregate win for his side in the process.

It is the record 13-time European Champions who once again have their name in the final four,  gaining revenge for last season’s semi-final defeat at Stamford Bridge and setting up a potential all-Madrid clash in the process. The Blues have completed a number of incredible European
comebacks over the years, despite Tuchel’s men not managing to complete the turnaround on this occasion. Let’s take a look at two of the best of them.

Jose Mourinho’s first season back at Stamford Bridge after six long years away had been a surprisingly quiet affair. The Blues sat third in the Premier League, with only an outside shot at the title. In Europe however, it had been plain sailing. They had reached the last eight at a canter. That was until a date with the newest member of Europe’s elite, PSG.

The Parisians were well on their way to a domestic treble. They were miles clear in Ligue 1, the Super Cup was already in the bag and a League Cup final against Lyon was on the horizon. It seemed that they had too much for Chelsea as well. Goals from Argentinians Ezequiel Lavezzi and Javier Pastore, as well as a David Luiz own goal, meant that they would travel to West London firmly in the driving seat.

It would take just 31 minutes for German winger Andre Schurrle to spark the tie into life though, securing a 1-0 lead in the return leg and halving the deficit. The second goal hadn’t come as expected though. With the minutes ticking away, it seemed as though it would be visitors who would secure their greatest night on the continental stage. Edinson Cavani had a chance to put the tie to bed however, he fluffed his lines.

Then, with three minutes left on the clock, Gary Cahill’s long ball forward found its way to Demba Ba, who bundled home to secure a famous away goals victory.

In 2005, Frank Rijkaard’s Barcelona were arguably the best team on the planet. With Ronaldinho at the peak of his powers and Deco orchestrating things in midfield, it would take a special team to best the Catalonians over two legs. A special team was exactly the thing that The Special One
had created though.

Two goals in six minutes from Maxi Lopez and Samuel Eto’o meant that the visitors travelled to Stamford Bridge with a slender lead, but it didn’t take long for the hosts to overturn the deficit, with three goals in just 19 minutes leaving The Blues in dreamland.

Just when an easy night’s work appeared to be on the cards though, a Brazilian magician took centre stage. He’d firstly tuck away a penalty after Paulo Ferreira was adjudged to have handled inside the box, and then just 11 minutes later came his moment of genius. Surrounded by blue shirts on the edge of the penalty area, Ronaldinho first feinted one way, then the other, then buried a sublime finish beyond Petr Cech, putting his side within touching distance of the last eight.

The hosts were in desperate need of a goal and in that hour of need came John Terry. Who else? With 15 minutes left, his flicked header from Duff’s out-swinging corner bypassed everyone and trickled into the bottom corner of Victor Valdes’ goal, giving his side an away goals victory and
announcing Chelsea’s arrival on the European stage. 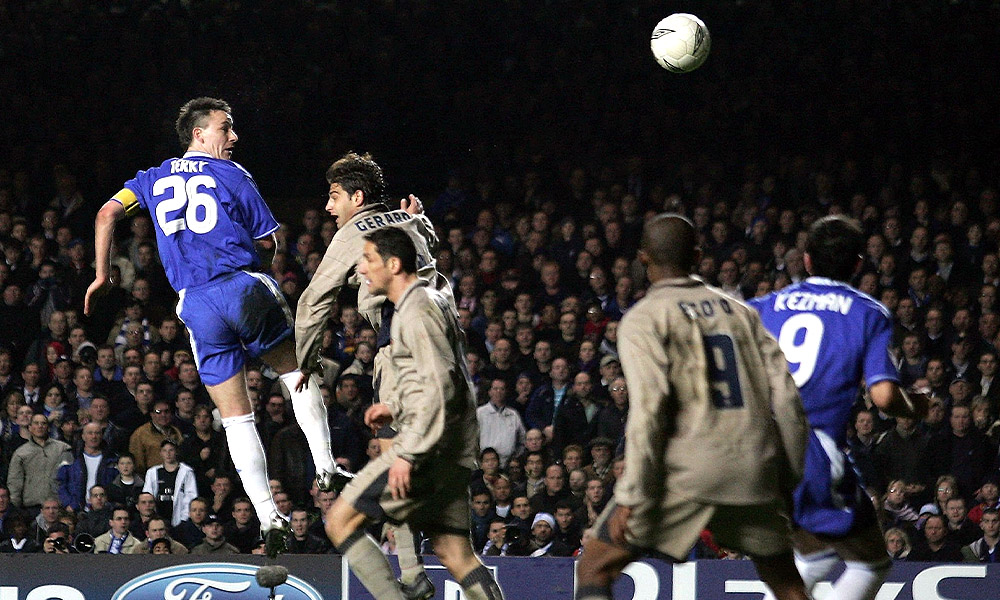 Ateneo rolls on, tears Adamson streak to items; UP sews up No. 2 spot

Strive This for Higher Compression